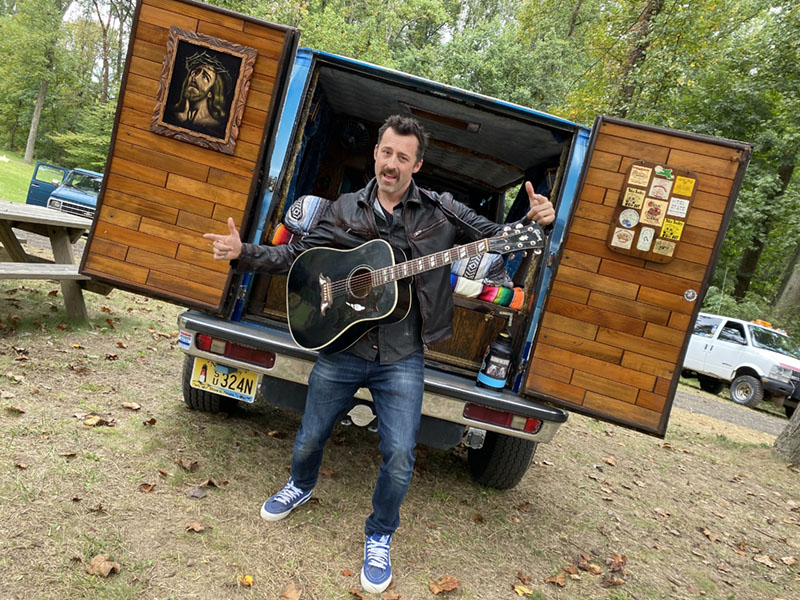 Few will argue the transcendent power of music to lift spirits, ease anxieties, motivate, relax, enchant, captivate, stimulate, and evoke. Music is a force of nature and those who realize this understand that a song is not a just song. These days, most popular music is usually a 3-5 minute re-listenable experience. A good artist / musician knows how to take you on a ride and make that time worth it for the listener. When it comes to Jay Della Valle, he hopes to take you on a ride you’ll never forget. But the cool thing is, he’s already on that ride, so you can be sure the experience will be rooted in the kinds of things that make for some stellar entertainment.

“I’m a songwriter, a singer and musician, but these are very much just tools for a much bigger musical purpose as far as I’m concerned. The whole process of coming up with an idea and channeling a song, recording it, seeing it through to competition is “creation” for me.  You’re bringing something into this world that simply wasn’t there before and then deciding how to nurture it once it exists. For me, I’m never just “writing a song.” I’m cataloguing my poetic/musical perspective on an experience, a feeling, a need, a passion, a conflict in my life. I want it to be effective as a song and reach others, inspire others and hopefully have a ripple effect that ultimately does some good in this world in some way. I always need to have a plan when I write music to put out into the world. This gives me structure and something to achieve. It doesn’t always have to be something super profound and introspective either. It could just be pure fun and shenanigans, but that’s still a specific objective I’ll strive to achieve in order to compel people want to dance, laugh or sing along.”

For Jay, his songs are like medicine for the soul and he’s hoping you might be inclined to drink some through your ears. But like any music, listening receptively is often all about the timing. This might be why he has refused to make music in a specific genre and instead decided to dip his toes in the ponds of so many styles throughout the years. Full band or solo acoustic, alternative, rock, pop rock, punk pop, folk, indie folk, soul- these are all likely sub categories and sonic landscapes that Jay has experimented with. “The music industry constantly wants to put you in a box, says Jay. I get it to some degree, but I am who I am and I do what compels me. It might be confusing to a critic, but I can’t really think about that. It’s all about the song and the moment at the end of the day.”

With echoes of sun drenched Southern California beach culture, it’s no surprise Jay’s vibe has been compared to the likes of Sublime, not-coincidentally one of his favorite bands since he was young. However, his slick and witty word-play songs evoke a Jason Mraz craftsmanship while his more laid back acoustic beach ballads will entice a Jack Johnson frame of mind. Plus, we can’t leave out his more introspective alternative rock sounding music which reminds listeners of bands as versatile as Cake, Muse and even the ever soulful contemporary Hozier.

The thing about Jay is that unlike Mraz, Johnson and some of these other known acts, Jay too often travels out of what you’d normally expect to come out of him based on what you’ve heard before. Just like in life, he doesn’t tend to stay in one place for too long, so it makes sense that his music might follow suit and bring you through a variety of sonic landscapes ranging from the soulful introspective all the way to freewheeling carefree. It’s not always sunny in Jay’s world either, so sometimes you might need to bundle up or bring an umbrella. But this is Jay’s life and to listen to his music is to get a glimpse of what he’s all about.

Since the pandemic started, Jay has been working diligently on his solo material again, collaborating with other great songwriters and preparing to release a collection of new songs and videos, starting with “Head Above Water” in May 2020 and most recently the ever charming and hilarious “The Van Song” in August 2020. These songs help to paint the picture of where Jay is at right now and his plan is pretty straightforward. That is, to keep putting out more great music.

You also can’t really talk about Jay these days and not mention his involvement with a charity called The Ukulele Kids Club – an organization that donates ukuleles to hospitalized children and supports music therapy programs in children’s hospitals worldwide. Under the defining premise that “Music Heals,” Jay stands on the board as Events Director, commandeering performances, events, house concerts, and fundraising efforts in the US & Canada to support UKC’s initiatives. He is also currently studying to be an actual certified Music Therapist.

Whether it’s performing private events, quaint rustic weddings, intimate house concerts, lawn-locked arts festivals with his band Owls & Lions or playing solo for his friends, you’d be challenged to find him without a guitar or ukulele, ready with song and a hope to leave you feeling better than you felt before you experienced him.

Keep up with Jay’s adventures on Instagram and Follow his playlist on Spotify to have all his music handy for your next road trip or BBQ.